Intrauterine insemination (IUI) is one of the simpler, “low-tech” treatments for infertility and the starting point for many individuals and couples who are having difficulty with conception on their own. Patients who have been diagnosed with unexplained infertility, mild male factor infertility, a cervical factor, or irregular or absent ovulation are often good candidates for IUI.

The goal of this treatment is to increase the number of sperm that reach the Fallopian tube and subsequently increase the chance of fertilization. IUI provides the sperm an advantage by giving it a head start, but still requires the sperm to reach and fertilize the egg on its own. Depending on your fertility diagnosis, IUI can be coordinated with your normal cycle or with fertility medications.

A physician may also recommend IUI in cases where a woman or couple needs donor sperm. Before you and your doctor make the decision about whether or not IUI is right for you, you will undergo standard infertility testing.

Related: Learn more about what to expect from your first visit.

Intrauterine insemination is the process whereby a clinician will place a concentrated specimen of sperm in your uterus. For this procedure, he or she will insert a speculum into your vagina in order to better visualize your cervix. He or she will then pass a soft, thin catheter through the cervix opening and into the uterus. The clinician will introduce the washed sperm into the uterus through this catheter. The procedure is done in our office and takes 1 to 2 minutes. It is not painful and does not require anesthesia. You can return to normal daily activities immediately after an IUI.

Clomiphene citrate (Clomid, Serophene) is a medication commonly used for the treatment of women with ovulation disorders as reflected by infrequent or irregular menstrual cycles. Clomid is a pill taken orally for 5 to 7 days, typically on day 3 of a woman’s menstrual cycle to induce ovulation. Clomid works at the level of the brain and pituitary gland and facilitates the release of follicle-stimulating hormone (FSH) and luteinizing hormone (LH). FSH and LH, in turn, stimulate the ovaries to produce eggs and the ovarian hormones estradiol (E2) and progesterone (P4). The initial prescribed dosage of clomid is 50 to 100 mg (one or two tablets) daily at bedtime, or as prescribed by your physician.

Clomid is also used in conjunction with IUI. Sometimes, in addition to Clomid, an injection of Ovidrel is recommended prior to the IUI to trigger the release of your egg to increase the ability to correctly time the insemination.

Monitoring of egg development is usually done with E2 and LH blood hormone tests and ultrasound scans of the ovaries to determine when the egg is mature. The ultrasound allows the physician to visualize the thickness of the uterine lining and the ovaries, more specifically the number of follicles within them. The bloodwork shows the trend of pre- to post-stimulation hormone levels; increased levels of estrogen indicate follicular development.

Our specialized team of andrologists prepare each sperm sample with a procedure commonly known as "sperm washing" in one of our andrology laboratories. Sperm washing involves placing the sperm sample in a test tube and then a centrifuge, which results in the sperm collecting in a "pellet" at the bottom of the test tube. The andrologist removes the seminal fluid and places the fluid (media) above the sperm. The most active sperm will then swim up into the media. The final sample consists of the most active sperm concentrated in a small volume of media. A single IUI is usually performed when a patient is using fresh sperm. If a patient is using a frozen sperm sample, the clinician can likely perform one or two IUIs.

Our physicians generally perform IUIs 1 and a 1/2 days after the trigger injection, which sets ovulation in motion. The exact timing of insemination is not critical to the exact time of ovulation. Both the sperm and the egg remain viable in the female genital tract for many hours, so the physician may time the insemination within a window of several hours around the time of ovulation. Following the IUI, you will take daily supplemental progesterone—usually in the form of a capsule inserted into your vagina twice a day—to support the endometrial lining of the uterus and implantation of the embryo.

To learn more or to schedule an appointment, please speak with one of our New Patient Liaisons at 1-877-971-7755 or fill out this brief form.

For couples who have no difficulty achieving a pregnancy, the natural chance of pregnancy per month of ovulation is largely dependent on the age of the woman. For women in their early 30s or younger, the natural pregnancy rate is about 20 to 25 percent per cycle. This drops off significantly through her mid-to late-30s; by her early 40s, the chance of pregnancy is about 5 percent per cycle. This age-related decrease is primarily due to a decline in the quality of the eggs within the ovaries.

For most couples having difficulty achieving a pregnancy their chance of achieving a pregnancy is not zero, it is just lower than the average rate of conception—unless both Fallopian tubes are completely blocked, there is no sperm, or the woman never ovulates. Ovulation induction (or superovulation) with IUI helps patients to achieve pregnancy rates closer to the natural per cycle chance of pregnancy for women in their age group who do not have infertility (see fig 1). 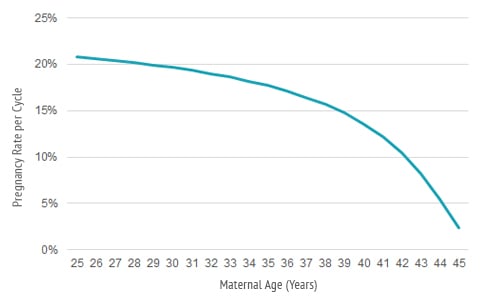 Figure 1. Pregnancy rate per cycle following ovulation induction (OI) or superovulation with intrauterine insemination (IUI) with a minimum of 9 million total motile sperm (TMS) according to female age at the time of treatment. (2004-2015)

Since the chance of pregnancy per treatment cycle is modest, it may take more than one cycle of IUI treatment in order to achieve a pregnancy. However, after three to four cycles of IUI treatment, if pregnancy has not occurred, it may be advisable to move to more advanced treatments such as in vitro fertilization (IVF).

Because the chance of pregnancy with IUI is low for women over the age of 40, we generally recommend fewer IUI cycles before progressing to IVF. After 40, patients should consider IVF earlier in the treatment timeline.

In addition to age, a couple’s prognosis for success with IUI depends on their diagnosis (see figure 3). IUI is most successful in couples where the primary cause of infertility is an ovulatory problem such as polycystic ovary syndrome (PCOS). In these cases, the treatment comes closest to restoring the natural per cycle pregnancy rate.

For several reasons IUI is also quite successful for the treatment of mild male factor or unexplained infertility, although the success rates are slightly lower than for those couples where ovulatory dysfunction is the only problem.

Intrauterine insemination is less successful if the cause of infertility involves decreased egg quality, diseased Fallopian tubes, or endometriosis. IUI treatment cannot improve the quality of the eggs within the ovaries or repair damaged anatomical structure. As with advanced age, it may be advisable to move to IVF earlier in the treatment timeline with these diagnoses. 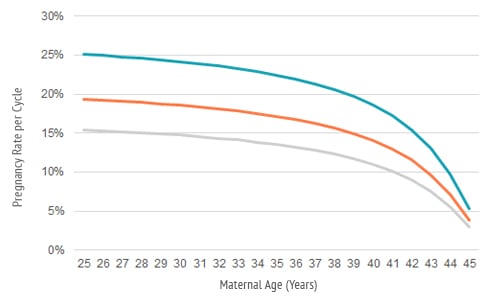 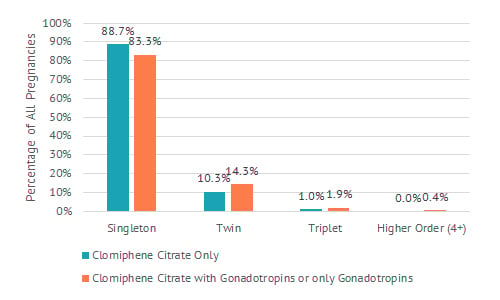 Nonmedicated cycle with IUI: Also known as natural cycle IUI, a non-medicated cycle with IUI is often used by single women or same-sex female couples who are not directly experiencing infertility, but rather a lack of sperm. This treatment involves tracking the development of the egg that is naturally recruited during a menstrual cycle and then introducing the donated sperm. You will come into the office for two to four monitoring appointments to track egg development and cycle timing.

Ovulation induction with IUI: The goal with ovulation induction is to recruit and develop a single egg during the stimulation phase. At the time of ovulation, insemination occurs, placing the sperm directly into the uterus. IUI puts the sperm closer to the egg than possible with intercourse alone. You will come into the office for three to five monitoring appointments to track egg development and cycle timing.

Injectable medication cycle with IUI: If pregnancy doesn't result from ovulation induction with oral medications, the next step is to use injectable medications. These medications stimulate the ovaries to produce two to four eggs; when combined with IUI, you have an increased possibility of conception. Essentially, the sperm is given more targets to hit. You will come into the office for four to eight monitoring appointments to track egg development and cycle timing.

When does my husband/partner produce a sperm sample for the IUI?
He will need to produce a sperm sample the same day as your IUI. Drop-off is scheduled 1.5 hours before the IUI. The specimen should not be produced longer than 2 hours from appointment time. Patients are provided with a specimen cup so he can produce in the comfort of his home. If he chooses to use a collection room, that is also available in some SGF locations.

Do I need to take it easy after an IUI?
Most people can return to regular activity following the procedure, but it is suggested during this time that you refrain from high impact activity. If you start to feel any type of cramping, we recommend you take it easy.

How long after an IUI should implantation occur?
Implantation usually occurs about 5 to 6 days after the procedure.

When will I find out if I am pregnant?
Approximately 2 weeks after the insemination, you will return to our offices for a beta (blood) pregnancy test.

HOW TO GET STARTED

Shady Grove Fertility has treatment options to help almost everyone build the family of their dreams. And it all starts with one call: 1-888-761-1967

About 50% of treatment cycles performed at SGF are considered low-tech. Join Drs. Stephen Greenhouse and Shruti Malik for an on-demand webinar to learn more about low-tech treatment.

HOW TO GET STARTED

Shady Grove Fertility has treatment options to help almost everyone build the family of their dreams. And it all starts with one call: 1-888-761-1967

About 50% of treatment cycles performed at SGF are considered low-tech. Join Drs. Stephen Greenhouse and Shruti Malik for an on-demand webinar to learn more about low-tech treatment.

The following mark the 9 most recent pages you have visited on ShadyGroveFertility.com. Please click a link below to return to that page.